2016 marked the 50th anniversary of the founding of the Laguna Woods Village Camera Club. On April 20, 2016, the Mayor and City Council members of Laguna Woods presented a Certificate of Commendation to Camera Club President Mac McNamar and club officers Joel Goldstein and Mark Rabinowitch.

The Photographic Society of America sent us a letter commemorating our 50th anniversary and a certificate of recognition.
View the Certificate   |   Read the Letter (PDF, 500 KB)

Club Officer Joel Golstein wrote an excellent article about the Club, which is presented in full below:

Photographs are memories. They are recordings of family. They are memories of places we’ve been. They are displays of our skills. The Village is fortunate to have a club that helps us capture, edit, preserve, and share these memories.

The Camera Club is one of the very first clubs to be organized in this community. Steps were taken to organize it in 1965, and it was formally established in 1966. Since that time it has continuously offered showcases, workshops, classes, and other services for the benefit of its members and the Village.

Showcases have taken audiences to every continent and displayed familiar as well as exotic places some of us never even knew existed. Members offer nature, travel, and artistic works, and professional photographers often come to display their work. Classes and workshops are offered for every skill level and virtually all areas of photography. The instructors are both club members and outside experts. They cover everything from cell phone cameras and inexpensive point-and-shoot cameras to the most sophisticated digital single-lens reflex cameras.

Skills are improved and experience is gained through evaluations by expert judges who critique and score our images. We also evaluate our own efforts, for example by voting for short photographic slide shows made by members.

Service to the Community

The club serves the community by photographing special events such as the Senior Games, Clown Alley charitable events, and others. Club members often contribute photos to the Globe and to the Village’s web site.

Last year members contributed their photos of many of the locations in the National Park service system. Member Tom Getz edited these into an hour-long tour of our national parks and monuments, accompanied with stirring music. The presentation so impressed the audience that it received a sustained ovation.

The club volunteers support the excellent facilities provided by the Village in Clubhouse 4. These are available every weekday and include the use of editing, scanning, printing, matting, and library resources. Outstanding prints adorn the walls of the photographic classroom and are sometimes on display in other Village public buildings. General meetings are held twice monthly in Clubhouse 3 [currently online due to Covid] and are open to everyone. A gala holiday and awards dinner is held each December.

The City of Laguna Woods recognized the Camera Club upon its 50th anniversary with a special commendation as shown in the photo below.

While many members are experts and some belong to the Photographic Society of America, many others are beginning and intermediate photographers. The club has an excellent newsletter, Cameraderie, which offers a great deal of advice and articles of interest.

The Laguna Woods City Council presented this Certificate of Commendation to the Camera Club at the April 20,, 2016 council meeting. 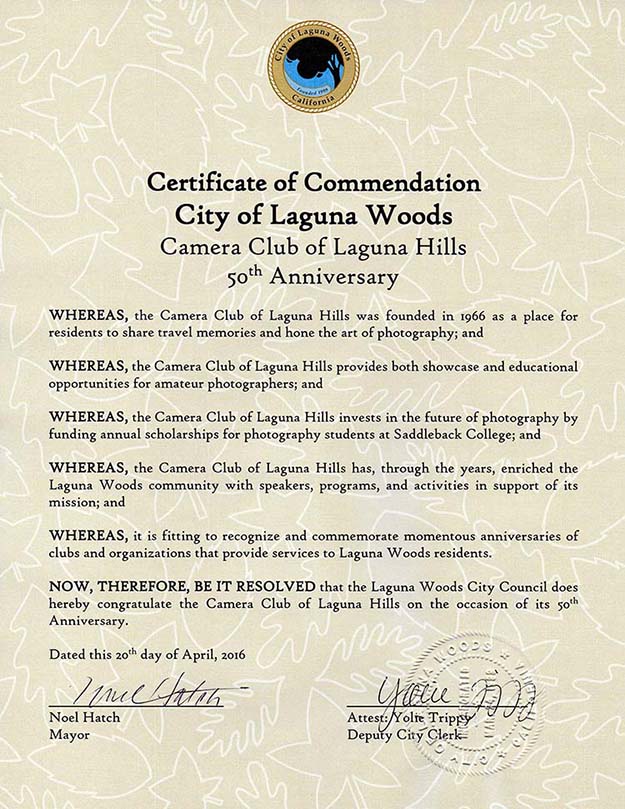 City Council with Club Members at the Ceremony 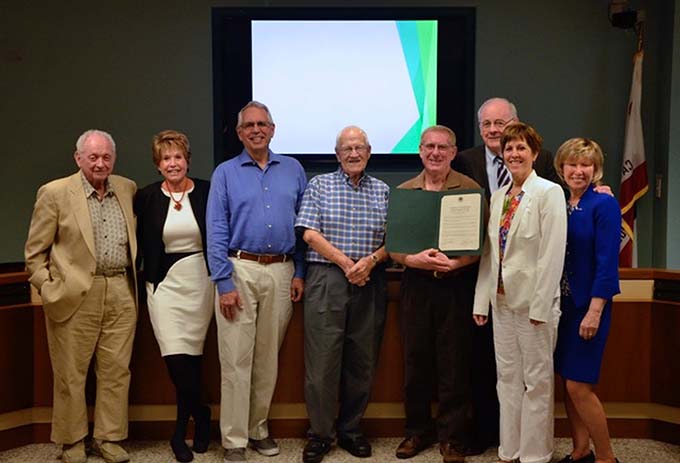